A Culinary Exploration of Jewish Cooking from Around the World

From the James Beard Award-winning, much-loved cookbook author and authority: an around-the-world collection of recipes from the global Jewish diaspora—an essential book of cooking and culture.

Driven by a passion for discovery, King Solomon is said to have sent ships to all corners of the ancient world, initiating a mass cross-pollination of culinary cultures that continues to bear fruit today. With King Solomon’s appetites and explorations in mind, here celebrated author Joan Nathan gathers more than 170 recipes that span the millennia: from classics like Yemenite Chicken Soup with Dill, Cilantro, and Parsley; Spinach and Feta Bourekas; Hummus with Preserved Lemon and Cumin; and Hamantaschen with Poppy Seed or Chocolate Filling…to contemporary riffs on traditional dishes such as Smokey Shakshuka with Tomatoes, Peppers, and Eggplant; Homemade Herbed Labneh with Beets and Puy Lentils; Baghdadi Chicken with Rice, Coconut, and Cilantro; and Roman Ricotta Cheese Torte. We travel with Joan from India to France, from Italy to Mexico, from El Salvador to Israel and, of course, all across North America, in a gorgeously illustrated culinary exploration that is filled with fascinating historical details, personal histories, and fantastic recipes that showcase the diversity of Jewish cuisine. It is the most ambitious and satisfying book of Joan Nathan’s stellar, four decades-long career. 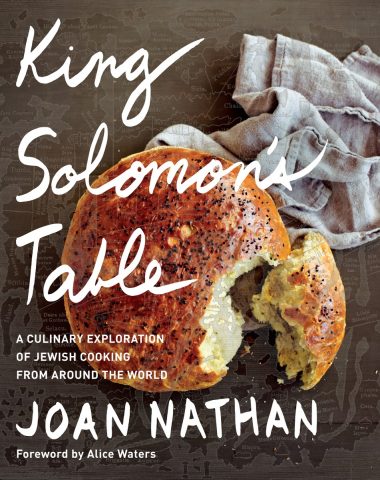