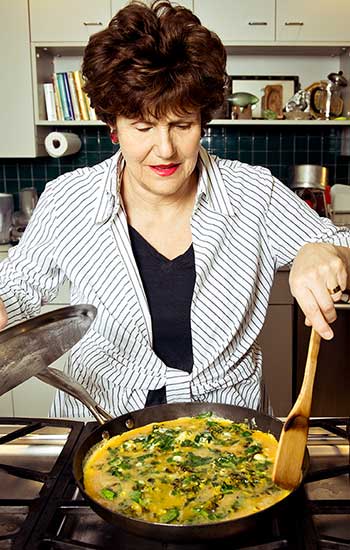 Joan Nathan is the author of eleven cookbooks including her latest work, “King Solomon’s Table: a Culinary Exploration of Jewish Cooking from Around the World,” released by Alfred P. Knopf in April 2017. Her previous cookbook, “Quiches, Kugels and Couscous: My Search for Jewish Cooking in France” (Knopf), was named one of the 10 best cookbooks of 2010 by NPR, Food and Wine, and Bon Appétit magazines.  She is a regular contributor to The New York Times and Tablet Magazine.

In 2004 she was the Guest Curator of Food Culture USA, the 2005 Smithsonian Folklife Festival on the National Mall in Washington, DC, based on the research for her book, The New American Cooking.

Ms. Nathan’s PBS television series, Jewish Cooking in America with Joan Nathan, was nominated in 2000 for the James Beard Award for Best National Television Food Show. She was also senior producer of Passover: Traditions of Freedom, an award-winning documentary sponsored by Maryland Public Television. Ms. Nathan has appeared as a guest on numerous radio and television programs including the Today show, Good Morning, America, The Martha Stewart Show and National Public Radio.

An inductee to the James Beard Foundation’s Who’s Who in American Food and Beverage, she also received the Silver Spoon Award from Food Arts magazine. In addition, Ms. Nathan received an honorary degree from the Spertus Institute of Jewish Culture in Chicago and the Golda Award from the American Jewish Congress.  In May 2011, she was awarded a Special Recognition Award from the YIVO Institute for Jewish Research for her work to preserve Jewish foodways. In 2015, Les Dames d’Escoffier awarded Joan Nathan the prestigious Grande Dame, an award recognizing professional achievments in the food industry. Previous recipients include Julia Child, Marcella Hazan, and Alice Waters.

Nathan serves on the board of the DC based organization, Martha’s Table, by whom she was recently honored for her work on Sunday Night Suppers, an annual fundraising event chaired by Nathan, Alice Waters and Jose Andres.  Through a collaboration of chefs, organizations and concerned citizens, the dinners are held one night a year in various homes across the DC Metropolitan Area.

Joan Nathan was born in Providence, Rhode Island. She graduated from the University of Michigan with a master’s degree in French literature and earned a master’s in public administration from Harvard University. For three years she lived in Israel where she worked for Mayor Teddy Kollek of Jerusalem. In 1974, working for Mayor Abraham Beame in New York, she co-founded the Ninth Avenue Food Festival. The mother of three grown children, Ms. Nathan lives in Washington, D.C. and Martha’s Vineyard with her husband, attorney Allan Gerson.