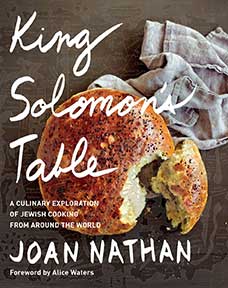 From the James Beard Award-winning, much-loved cookbook author and authority: an around-the-world collection of recipes from the global Jewish diaspora--an essential book of cooking and culture.

Jewish Food and Heritage In Italy With Joan Nathan

Join the renowned food writer Joan Nathan on a culinary cultural exploration through Italy’s rich Jewish heritage on this eight-day journey to Tuscany and Rome. As you discover the secrets of pasta making and kosher wine production, sample traditional and modern dishes, and explore the imprint of 2,000 years of Jewish life in Italy.

There are no upcoming events at this time.

Listen to my daughter Daniela talk with NPR’s Robert Siegel about Allan’s leading a secret life as a child on MOMENT LIVE! ZOOMINARS tomorrow 9/14!

Nazi hunter and international lawyer Allan Gerson, who represented victim’s families after the Lockerbie bombing, didn’t know his real name until he was 12 years old. Born at the end of World War II, Allan and his family, out of desperation, eventually entered the United States under assumed names. Daniela Gerson, assistant professor of journalism at California State University, Northridge will discuss her father’s book Lies that Matter and what it was like learning about her family’s past secrets. Daniela will be in conversation with Robert Siegel, Moment special literary contributor and former senior host of NPR’s All Things Considered. Register using link in bio. @moment_mag @danielagerson77 ... See MoreSee Less

Featured in @nytcooking, this seasonal salad of barley, beets, grapes, olives, pomegranates and more, pays tribute to foods that the biblical Canaanites might have eaten. Perfect for Rosh Hashanah, the ingredients are symbolic of fertility, abundance, and prosperity in the New Year. For story and recipe, the link is in my bio. Photo: Ryan Liebe for The New York Times. Food Stylist: Hadas Smirnoff. ... See MoreSee Less